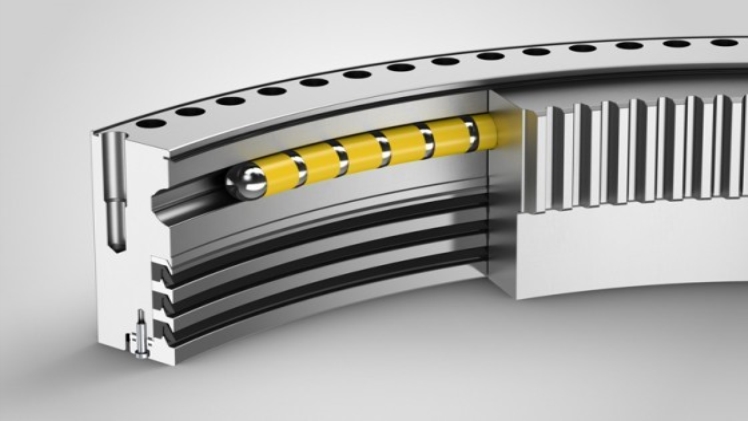 Wind power generation equipment is expensive, with harsh operating environment and high disassembly cost. Once there is a failure, huge claims may be generated, so the wind power generator group should seek life of no less than 20 years and the warranty period of 5 years [1]. Wheel bearing in the process of design, manufacture, installation and use can produce all kinds of fault, including: rolling element and raceway pitting wear which resulted in increased clearance, oil free dry friction, maintains a fracture, rolling element and raceway serious abrasion and potholes, inner and outer ring and the upper and lower connection of metal structure is loose, metal structure, cracks, etc. [2]. These faults can be shown by vibration. In the actual use process, there will be some problems such as the temperature of raceway grease increasing and the power of driving motor increasing. However, due to the low speed (1-26 r/min) and large bearing capacity (the mass of blades and engine room reaches more than ten tons) of wind power rotary table bearings, they are not sensitive to the vibration generated, and some faults are not easy to be found [3].

At present, the problems facing the fault diagnosis of wind turbine rotary table bearing are [4] : (1) the bearing speed is very low, and the calculated fault frequency is very low. The high-pass filter will filter out the frequency below 3 Hz, coupled with the influence of environmental noise, so that the spectrum analysis effect is very poor or even impossible to carry out; (2) The interval of each fault impact is long, and it is difficult to detect the fault signal accurately by using the impact method; (3) The impact response frequency generated by the fault point is low, and the higher frequency component cannot be excited.

Wind turbine rotary table bearings usually only make small amplitude reciprocating rotation, many occasions for a long time in a static state, while bearing complex alternating load. Therefore, its failure mechanism is different from the rolling contact fatigue of ordinary bearings, and the design theory of ordinary bearings cannot solve the design and quality problems of rotary table bearings very well [5]. The experience of fault diagnosis is very little. Therefore, how to solve this problem has become a hot research topic in many countries. According to the literature [6-10], the world’s major famous enterprises have their own laboratories and test equipment, but they are always in the stage of technical blockade, and only publish partial pictures related to tests in advertisements or websites. Literature [11-12] studies the relationship between average friction torque, raceway wear and life. In reference [13], the fault diagnosis and test study of port turntable bearing are carried out. In reference [14-15], low speed and heavy load rotary table bearings of steel rolling were studied, and stress wave and wavelet analysis were used for fault diagnosis. On the basis of years of experimental research, literature [16-17] studies the bearing stiffness, raceway wear, starting torque, fatigue life and tooth root strength of wind power rotary table bearings, and considers that the main parameters for fault diagnosis and detection of wind power rotary table bearings are as follows: The number of running laps of the bearing, raceway wear, vibration acceleration, friction torque, raceway crack, grease temperature and driving motor power, etc. However, the parameter indexes characterizing the performance characteristics of wind turbine rotary table bearing still need to be deeply discussed in combination with tests.

The comprehensive performance test device of wind turbine rotary table bearing is composed of mechanical part, hydraulic system and measurement and control system. The test device is loaded by the hydraulic cylinder, and the axial force, radial force and overturning moment can be applied to the bearing at the same time. The hydraulic motor drives the turntable bearing to rotate and simulates the actual running state of the bearing. At the same time, the data is collected by the test sensor, and stored and processed.

Once the rotor bearing fails, its vibration, temperature, friction torque, noise and tooth root stress will change. Through the corresponding signal processing technology, the useful characteristic parameters can be extracted from the complex signal, which can characterize the running condition of the bearing, and the diagnosis of the turntable bearing can be realized by analyzing these characteristic parameters.

Vibration analysis of the rotary table bearing is the most effective diagnostic method [20-21]. According to previous test results [16-17], the vibration direction of the rotary table bearing is located in its axial direction, close to the driving motor. The temperature rise, friction torque and vibration acceleration of the wind turbine rotor bearing were measured in order to study the parameters characterizing the operation of the rotor bearing. The sensor layout of the test device is shown in FIG. 2, where the temperature sensor is placed in the mounting hole and contacts with the grease.

For a company 033. 50. The speed life test of 2410 type wind turbine rotary table bearing was carried out. The test bearing parameters were as follows: channel center diameter 2410 mm, steel ball diameter 50 mm, ball number 140, contact Angle 45°, outer tooth number 135. The bearing is a double-row four-point contact ball bearing, the outer ring is a gear ring, the material is 42CrMo, the steel ball material is GCr15. When the number of stress cycles reaches 1 million times, the theoretical fatigue limit of the material is reached, and the maximum speed of the turntable bearing in the test is 1. 5 r/min, 50% full load, the test runs 71. 6 days.

After the test, the rotary table bearing was decompressed to check the damage of the ball and the channel. The soft belt of the inner and outer ring appeared peeling, the surface of the other channels was smooth, there was a small amount of slight indentation in the local area, no pitting corrosion and other damage phenomena, and the ball was not damaged. Groove morphology of rotary table bearing.

3.2. 2. Analysis of temperature rise of grease

The following judgment conditions can be obtained from the trend of test data and the fitting formula:

Rate is negative; The slope of the friction torque curve and the temperature rise curve of the grease are negative and the slope of the envelope curve on the acceleration tends to zero in the middle (stationary phase) of the test.

Based on the data analysis and curve fitting of the temperature rise, friction torque and acceleration of the test bearing, it can be seen that when the fitting curve of the friction torque, temperature rise of the grease and the first derivative of the envelope on the vibration acceleration are positive, it indicates that the wind power turntable bearing channel is out of order. The combined judgment of the three factors has higher reliability than that of single fault determination. If the threshold is to be judged, it is necessary to accumulate the results of several tests to make a more accurate judgment

Previous articleForex Broker with Lowest Spread; All you need to begin trading
Next articleAre Vograce custom keychains stickers easy to use?