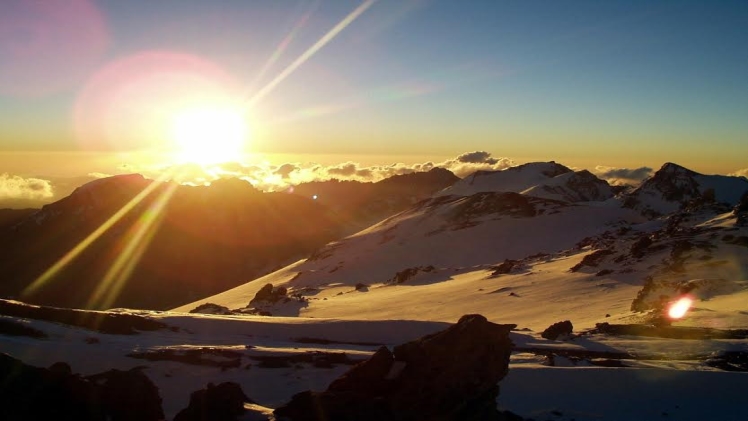 The Aconcagua region is part of the Upper Mendoza River Mendoza, which supplies water for irrigation and human consumption to more than 1,000,000 inhabitants.

The Andes Mountains, a product of the interaction of the Nazca and South American plates, rose approximately 25 million years ago. They give rise to remarkable highlights in the relief, which are clearly expressed in the exuberant elevation of the highest hill in the American Continent, which is called a running and folded girdle.

The irregular forms of the landscape in this sector of the Central Andes, in the shape of a “U,” mean that you must be very well prepared when climbing Aconcagua. These slopes are mainly due to the modeling of the ice bodies (glaciers) that later occupied most of the valleys mentioned above until approximately 15,000 years ago. Doctors and climbers are aware of the effects of Acute Mountain Sickness and its dangerous consequences in the form of cerebral or pulmonary edema. We know that isolated altitude psychosis exists without any associated medical symptoms, but we have very little data on altitude-related psychiatric symptoms.

Aconcagua (6,962 m), the highest peak in America, was ascended for the first time as early as the 19th century. The Swiss Matthias Zurbriggen reached its summit on January 14, 1897, integrated into the expedition led by the British Edward Fitzgerald, during which the Englishman Stuart Vines and the Italian Nicola Lanti also ascended. Over the years, the mountain has been receiving more and more ascents, basically on its normal route of the northwest face, accessible even for people without much experience in the field of mountaineering. Many agencies and high mountain guides offer it among their offer of ascents and adventure trips. How to climb Aconcagua is a question that we all ask ourselves and that we want to discover

In the same way, new routes have increased on its north, east, west, and, finally, on the south face. The 3,000 meters of unevenness on the southern slope were seen as an impossible wall for decades until the French completed the first ascent in 1954. Later, it represented – and continues to define today – a considerable challenge. Only available to climbers with a good technical level and clairvoyance to avoid the tremendous objective risks that it poses, which led Reinhold Messner to classify it among the most dangerous slopes in the world after opening a route on it in 1974.

Currently, for the Aconcagua climb, you must consider that the colossus of America has more than 30 routes or variants of ascent. Many of them are on the south face, although in reality, their profile does not offer many viable alternatives (along with their respective variants): the central spur of the original 1954 French route; the extreme right of the long and less compromised Argentine route of 1966; and the crossing from the South peak, which is accessed directly by the south ridge or by the exposed south pillar

Previous articleNeed Help In Packing? Call For Man And Van London!
Next articleAconcagua Climbing: Tips to Enjoy This Experience

The Correct way to Stacking Cycle with Boldenone