More
HomeSportsRobert Kraft and The Patriots Eye Future for Beating Josh Allen and... 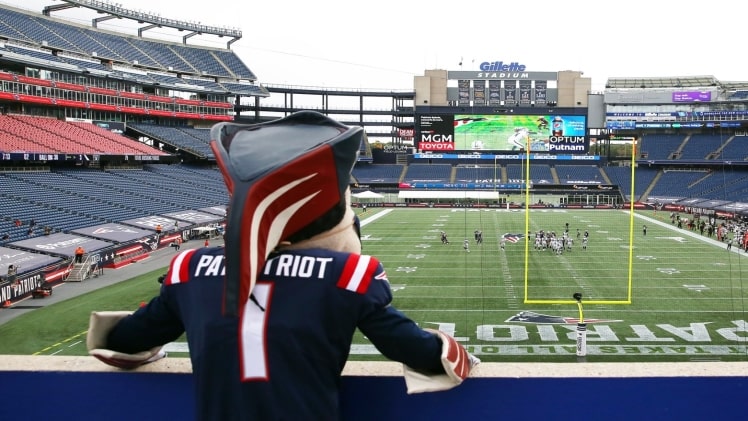 As the Patriots suffered a crushing defeat at the hands of the Buffalo Bills in the 2022 playoffs, everyone is now speculating on what the team should do next. Overall, most people have come to one conclusion—they need a team that can take down the Buffalo Bills and star-studded quarterback Josh Allen.

So how can the Patriots climb the mountain once again to NFL dominance?

Unfortunately, the team doesn’t have a lot of money at their disposal. As Patriots owner Robert Kraft spent plenty of resources last offseason to bring in some top talent, the front office isn’t ready to deal out a hefty contract. However, the team’s cap space will be adjusted, leaving a little wiggle room for landing a few good players.

That said, it seems the Patriots are focused on the draft to improve their roster in the near future. As New England’s season came to a disappointing close after an embarrassing loss from the Buffalo Bills, their focus is building a roster to take down their AFC East foes.

With that goal in mind, here are some top prospects the Pats should consider in the upcoming draft:

Nakobe Dean has the smarts and speed to take down Allen when it matters most. Although he’s a bit undersized for the position, his quickness and football IQ certainly make up for it. He’s measured at 6-feet tall and 225 pounds, which would give the Patriots defense some much-needed athleticism.

Sticking with defense, Devin Lloyd out of Utah could be a perfect match for competing against Josh Allen and the Bills. As Josh is deadly with his legs, Lloyd could use his speed to track down the QB in space. He could also use this quickness to contend with running back Devin Singletary and tight end Dawson Knox.

As Devin Lloyd used to be a safety, he also has impeccable coverage ability. This could be a great addition to a Pats defense that seemed out of sorts against the Bills. With all of this in mind, some experts see the Utah linebacker being drafted around No. 10 overall. If Devin lasts till No. 21, it would be foolish of the Patriots not to take him.

The Patriots have a long history of success at the cornerback position. That said, they’re looking for the next generation of talent for covering Allen’s top targets, such as Stefon Diggs, Dawson Knox, and Gabriel Davis. Robert McCreary from Auburn could fill the void.

McCreary is a man-coverage specialist in the cornerback position. He’s tough, handles several different roles, and is also a good fit for run defense. Additionally, he can help bring down the speedy Josh Allen.

Ahmad Gardner from Cincinnati is another corner who can help maintain Josh Allen and the Bills. He has length, top-notch speed, and great coverage ability, which are skills Patriots coach Bill Belichick can appreciate.

If drafted by the Patriots, Gardner may be well-suited for a secondary position that fights zone coverages. But with his speed and versatility, he can fit into several different coverage options.

Burks is a player that can light up the scoreboard in a hurry. This Arkansas star is a high-powered workhorse that can keep up with Allen and the Bills. Adding a wide receiver like Treylon, while also improving the talent of Mac Jones, can be an ideal combination for competing against the NFL’s best.

Burks is listed at 6-foot-3 and 225 pounds, providing excellent size for the position. He’s also gifted with incredible athleticism and a big body, which could give the Bills secondary some problems. Burks has deep-ball potential but can also work in the backfield to mix things up.

If Kraft and the Patriots can solidify the perfect draft class while adding a few other pieces, they can get much closer to conquering Josh Allen and the Bills.

After all, if we know anything about Robert Kraft, he sure knows how to draft—especially with that 199th pick.