More
HomeNewsRachel Nichols Reflects on Life in the NBA Bubble 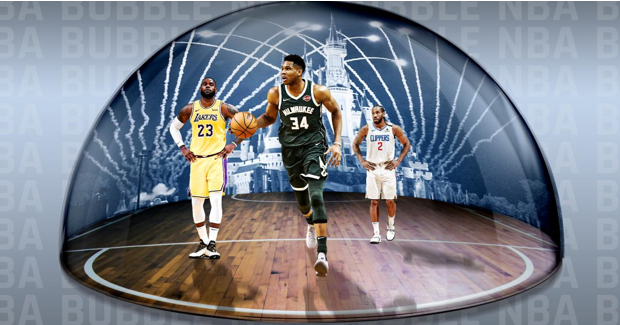 Rachel Nichols Reflects on Life in the NBA Bubble

As the National Basketball Association returns to playoff action with nearly all the public COVID-19 restrictions gone, Rachel Nichols looks back on the playoff run that was unlike any other.

NBA teams don’t play to be bubble teams, but playing in the bubble was a different story. As COVID-19 took the country and the sports world by storm in the spring of 2020, the NBA paused its activities and put a plan in motion to host the playoffs in one location. The league went to Orlando. It wasn’t a Disney vacation; it was a business trip. It was an invitation reserved for twenty-two teams and select staffers and media partners. Of course, Emmy Award-winning journalist Rachel Nichols was there covering the sights and sounds.

The bubble was created to keep COVID-19 out – there were strict limitations on who could and could not visit.

“Being away from my family was obviously the hardest part. I mean, you can’t just go back and forth,” said Nichols. “But I was pretty psyched that the NBA did it. I thought it was an impressive thing they pulled off,” she added.

Video technology made the distance more bearable. Nichols ducked in and out for daily facetime calls with her family. She wasn’t the only one missing home. People inside the bubble talked more about their families than usual because they were missing their loved ones more than ever. It was on everyone’s mind. And it wasn’t a normal regular season trip…it had the potential to be two or three months for some.

The staffers in the bubble worked around the clock. There were no days off, just 24 hours a day, seven days a week. There were hundreds of behind-the-scenes people doing intense sanitizing, cleaning, and organizing. The mail room was an important point of emphasis.

“They had to hose everything down because at that point there was still a real concern. There were huge pallets of where each team had stuff to come in,” said Nichols.

Mailroom employees had to wipe down everything that came in. One player ordered a pinball machine. Another wanted a refrigerator with a freezer and a water maker. Someone had a couch delivered. Those things were sourced and vetted like global leaders were making an appearance and items needed security clearance. You can visit this tamilarasan to get the latest news and also find out the world update breaking news of all time on mxtube This is filmlinks4u the best web portal for you where you can get all types of news.

Despite the inconvenience of being in the bubble, the experience was a once in a lifetime opportunity. Nichols made the most of it, even finding time to play UNO with the Antetokounmpo brothers.

“I got completely hustled. So, Kostas, the youngest brother of the three who are here in the bubble, had UNO. He had one card left and I was the one who had to make the next play,” said Nichols.

“I was about to put down a card of a blue color because I was a hundred percent sure that the card in his hand was not blue. And Thanasis, on the other side of the table, was like, don’t do that. He’s trying to trick you. He has a blue card in his hand. And I was like, come on, I know what I’m doing. I’m putting down blue.  Thanasis was like, no, I swear, I’m his brother. I’m telling you; he’s trying to trick you. Believe me. And so, I believed him, and I just got hustled. I let myself get hustled by three professional athletes,” she went on to say.

Rachel Nichols witnessed firsthand their competitiveness. It was fascinating to watch their interactions.

“I saw a lot of it in UNO, but they say that they play so hard when they play each other because neither one of them wants to let the other down in saying they didn’t set a good enough example for the younger one coming next up”, explained Nichols.

The seasoned host had been covering major sports for more than 25 years, but she confessed handling the trophy presentation made her nervous.

“So just even having that sort of experience in the moment, felt surreal. I had to look down at a piece of paper to make sure that I correctly identified the Larry O’Brien Trophy when introducing Adam Silver,” she said.

“I had this moment where I did not want to get the two or three things, I was supposed to do up there wrong and had to look down, and I did, which was embarrassing because I was like, yes, this is Larry O’Brien trophy, that is Adam Silver, but you want to get the words exactly, like they want you to have those 12 words. They want them in the right order,” added Rachel Nichols.

Life in the bubble provided a deeper level of gratitude for Nichols. Some of her calls back home were tough and she didn’t always like the situation, but after those moments passed, reality hit. Some extraordinary things happened, and she was one of the few people who got a chance to see them in the bubble firsthand. That made the hard stuff legitimately worthwhile.

“I was completely safe there. I got to see things. I love basketball and I love sports and I have stuck with it through all kinds of things that might have turned me away,” said Nichols.

It was a sacrifice, but one worth making. The few media that were there were part of history, something so big. Nichols had one producer with a camera and got some help from a second producer with another camera. The Jump, the show Rachel Nichols created and hosted, was the only daily show in the bubble.

You couldn’t order a pizza from around the corner, but the league and its players managed a lot of complex and nuanced stuff. Although it came with isolation, Nichols felt like she was walking around on the safest island in the world while COVID-19 was raging on.

“I was very impressed by the bubble. Not only did all those people do all those things, but they also didn’t have a single case of coronavirus among a single player.”

The bubble did its job and gave Rachel Nichols a better appreciation for things she didn’t have pre-pandemic.