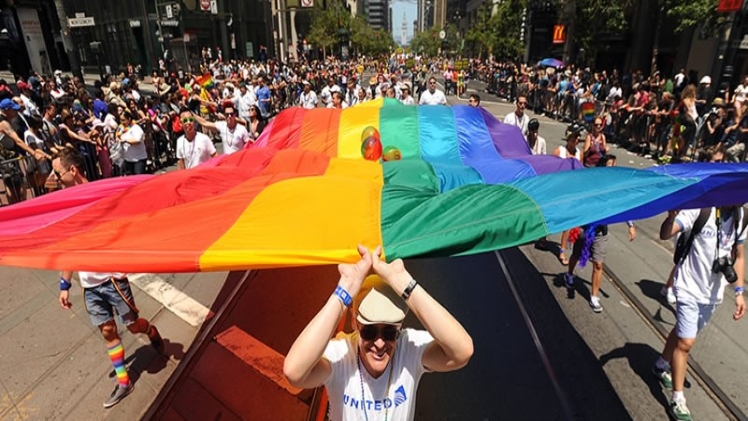 From the SF Giants’ first MLB celebration of Pride Month at Oracle Park in San Francisco to Kamala Harris marching as the first sitting Vice President to attend the Capital Pride March in Washington, DC, June 2021 has been a month filled with historic breakthroughs for the national LGBTQ community.

Although Pride celebrations have been around since the 1970s, Pride Month celebrations in 2021 marked a year of historic new achievements for the LGBTQ community as more and more Americans across the country embrace the concept of equality for people of varied sexual orientations and gender identities.

The visible display of progress across the nation began at the start of the month when Larry Baer, CEO and President of the San Francisco Giants declared that the Giants would be celebrating Pride Month on the field this year. The team showed its support for the LGBTQ community by sporting new logos that incorporate the 11 colors of the Progress Pride flag on their baseball caps and jerseys at their home opener against the Chicago Cubs on June 5. The logos then appeared on caps and jerseys subsequently throughout the month, to the delight of fans who tweeted their appreciation to the team for this show of support.

“We are extremely proud to stand with the LGBTQ+ community,” Baer announced in a statement, describing Pride Month as “One of the best annual celebrations in San Francisco.” He also expressed the team’s pride in “paying honor to the countless achievements and contributions of all those who identify as LGBTQ+ and are allies of the LGBTQ+ community.”

The Giants also honored the Pride flag colors by decorating the Scoreboard at Oracle Park in rainbow colors, as well as the trunks of the Palm Trees in Willie Mays Plaza.  The Giants continued showing support during the month-long celebration by presenting two nights of LGBTQ films at Oracle Park.

Meanwhile, Vice President Kamala Harris, already a groundbreaker who made history as the nation’s first female Vice President and the first person of color to hold that office, proudly made an appearance at the Capital Pride Parade in Washington, DC, sporting a T-shirt that read “Love is Love.” Marching alongside her husband, Doug Emhoff, the Vice President expressed her support for the LGBTQ community by stating “We need to make sure that our transgender community and our youth are all protected.  We need, still, protections around employment and housing.  There is so much more work to do, and I know we are committed.”

While Joe Biden isn’t the first U.S. President to issue a proclamation in support of the LGBTQ community, he is the first sitting President to include the word “Queer” in his proclamation, specifically citing June 21 as “Lesbian, Gay, Bisexual, Transgender, and Queer Pride Month.”  This striking example of language evolution demonstrates how far the LGBTQ community has come in normalizing terms that describe its various members. Biden’s specific use of this term, which was once used as a slur against people of questionable sexual orientation or gender identity, broadens the scope of inclusion within the LGBTQ community.

As the LGBTQ community has grown and expanded its commitment to diversity and inclusivity, the movement’s popular rainbow Pride flag has also evolved.  The new flag, known as the Progress Pride Flag, includes the original rainbow colors, but has the added component of a chevron of black and brown stripes, which represent the inclusion of communities of color, as well as pink, white and light blue stripes that represent people who identify as trans and/or non-binary.

“We proudly stand in solidarity and allyship with the LGBTQ+ community,” tweeted Jennifer M. Granholm, U.S. Secretary of Energy, who flew the Progress Pride flag for the first time in history over the U.S. Energy Department building in June 2021.

Secretary of the Interior Deb Haaland, the first Native American to hold a cabinet position in U.S. history, followed suit by flying the Progress flag over the Interior Department. “Today we celebrate Love,” she tweeted.

At the local level, the Progress Pride flag was also raised over the Stephen P. Clark Government Center in Miami-Dade County, Florida.  County Mayor Daniella Levine Cava pointed out the County’s support for “everyone, especially LGBTQ+ people of color and the trans community.”

On the international front, the Progress Pride flag was also raised over the Foreign Ministry building in Jerusalem for the first time in the nation’s history.

Several small communities across the U.S. also celebrated Pride Parades and official Pride Month Events for the first time in their histories.  These include the township of Haddon, in southern New Jersey, as well as Hanover, Pennsylvania, and the town of Healdsburg and County of Tehama in California.  While these celebrations may seem small when compared to the gat events held in such large metropolitan areas as New York, San Francisco, and Los Angeles, the fact that these events are now spreading into “mainstream middle America” is a sign that the country is becoming far more tolerant of the LGBTQ community and that more people than ever  are choosing to celebrate the diversity within the LGBTQ Pride movement.

First Books for Kids About LGBTQ Identity by Teen Authors

A publishing company called A Kids Book About has partnered with several teen authors working from the GenderCool Project to publish the first three books in a new series of books for children addressing such topics as inclusivity, as well as transgender and non-binary identity. The goal of this LGBTQ children’s book series is to promote conversations among children with their families and caregivers about queer identity and how to promote healthy and positive attitudes toward diverse members of the community. The books also aim to help young teens who are struggling with gender identity to feel supported and included as members of the LGBTQ community.  Hunter Chinn-Raicht, teen author of “A Kids Book About Being Non-Binary,” aims to provide children with “a positive look at what their future can look like.”

While the LGBTQ community has undoubtedly come a long way since the days of Stonewall and the first Pride marches and events in the early 1970s, there is still much progress to be made in securing total equality and acceptance for members of the LGBTQ community in the U.S.  With every first that marks a new source of respect and recognition for this community that has suffered so much discrimination in the past, progress is made toward breaking down the prejudices that have traditionally affected this sector of the population, contributing to a more unified, harmonious, and egalitarian America.

To keep up with many more firsts, follow the SF Giants on Twitter and CEO Larry Baer on Linkedin.