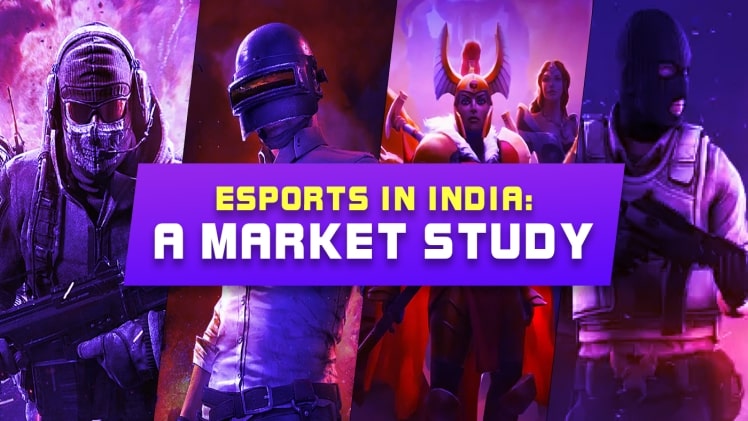 eSports in India (A Market Study)

As per a report by Fortune Business Insights, the global eSports market is expected to grow from $1.22 billion in 2021 to $1.44 billion by 2022. With this growth comes opportunities for new markets to emerge and develop. In this blog post, we will take a look at the eSports market in India – its current state and potential for growth.

Using data from research firms and industry experts, we will try to answer some important questions about the Indian eSports market: How big is it? What are the key drivers of growth? And what challenges does it face? Let’s get started.

Craze of eSports in India

India is a rapidly growing market for eSports and the market share is going to touch INR 11 billion by 2025. Some of the key factors that witnessed this rapid growth include:- the increasing popularity of online gaming, the proliferation of mobile devices, and the availability of high-speed internet connectivity. As a result, eSports are increasingly being seen as a viable career option for young people in India.

The Indian eSports market is currently dominated by mobile games such as PUBG Mobile and Call of Duty: Mobile. However, PC games such as Dota 2 and Counter-Strike: Global Offensive are also gaining in popularity. In terms of genres, multiplayer online battle arena (MOBA) games are the most popular type of eSports in India, followed by first-person shooters (FPS) and real-time strategy (RTS) games.

As the Indian eSports market continues to grow, it is expected that more companies will start investing in this sector. This will lead to more professional teams being set up, bigger prize pools being offered at tournaments, and more opportunities for talented players to make a living from playing video games.

Current scenario of eSports in India

eSports is a rapidly growing industry with immense potential. In India, the eSports industry is expected to grow at a CAGR of 30.72% during the period of 2020-2025. As per a research report by EY, the number of active eSports players in India is expected to reach 643 million by 2025. The current scenario of eSports in India is very promising and the future looks even better.

The recent COVID-19 pandemic has resulted in a sudden increase in the popularity of online gaming and eSports in India. This has created a huge opportunity for the growth of the eSports industry in India. With proper infrastructure and support, India has the potential to become a leading country in the global eSports market.

Market potential of eSports in India

The eSports market in India is still in its early stages of development, with a small but dedicated community of gamers and fans. However, the market potential and growth prospects are significant. This rapid growth is being driven by the increasing popularity of online and mobile gaming, the proliferation of broadband Internet connections, and the growing disposable incomes of young urban consumers.

Major Factors that are driving the growth of eSports in India

There are a number of factors that are driving the growth of eSports in India.

The future of eSports in India

eSports is a rapidly growing industry with immense potential in India. According to a report by KPMG, the eSports industry in India is expected to grow at a compound annual growth rate of 42% to reach Rs 1167 crore by 2022.

This growth is being driven by several factors, including the increasing penetration of broadband and mobile Internet, the rise of streaming platforms, and the growing popularity of mobile games. As a result, eSports is becoming increasingly accessible and visible in India. This visibility is translating into larger audiences and more opportunities for professional gamers.

These prize pools are attracting top talent from around the country and helping to professionalize the eSports scene in India. In addition, brands are beginning to invest in eSports sponsorship and advertising. For example, you can visit loco.gg and have a free online gaming experience at your comfort.

How to make eSports more popular in India

There are a number of factors that need to be addressed in order to make eSports more popular in India.

The Indian eSports market is growing rapidly and is expected to reach new heights in the coming years. If you are looking to get into this market, there are a few things you should keep in mind. First, make sure that you understand the culture and what appeals to Indian gamers. Second, invest in quality content and marketing initiatives that will resonate with your target audience. Finally, be prepared to face some stiff competition from well-established players in the industry. With these tips in mind, you can confidently enter the Indian eSports market and reap its many benefits. Are you ready to take your business to the next level?