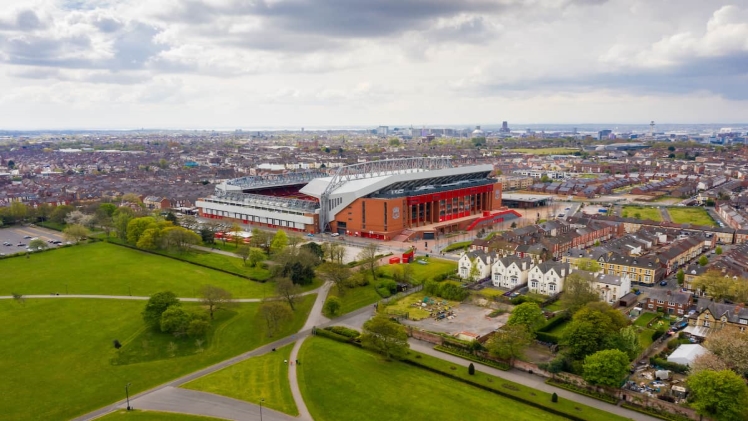 The Reds’ storied home is Anfield Stadium, where they have played for over a century. From Premier League games to UEFA Champions League fixtures, the turf has witnessed some memorable sporting showdowns over the years. The average attendance is roughly 53,000, and even the opposition has praised the uniqueness of the atmosphere on game days compared to any other athletic stadium on earth.

Anfield Stadium is one of the most frequented sporting arenas in the UK to devoted supporters of the Liverpool Football Club. For more information on this renowned Liverpool football stadium, continue reading.

Anfield Stadium in Liverpool is one of the attractions for football fans in the city.

Between the neighborhoods of Walton and Everton on Liverpool’s northeastern side is where you’ll find Anfield Stadium. The express 917 bus connects the City Center with the stadium. Liverpool Lime Street Station is a 2-mile alternative. It takes about 45 minutes to get there by walking through the Rupert Lane Recreation Ground and for more details Learn more about liverpool football club history.

Visitors not attending a game are welcome to park for free at the Sir Kenny Dalglish Stand lot. A game is underway, there is no assured parking, and you can anticipate the neighborhood becoming congested. If you can locate a space, the parking lots on Utting Avenue and Stanley Park are also good choices near Anfield. There get 267 wheelchair-accessible bays spread out throughout Anfield Stadium’s four main stands. For guests who require greater accessibility, there are a variety of designated drop-off spots.

The phrase “a field on a slope” is the source of the word “Anfield,” which gets borrowed from Old and Middle English. According to legend, the name got derived following the immigration of Irish people in 1850. Anfield got first owned by John Orrell, a close friend of John Houlding, the man who founded Liverpool F.C. when it first opened in 1884.

Before starting Liverpool, John Houlding was previously a member of Everton F.C. The stadium got leased by F.C. John Orell to Everton F.C. for a nominal rent.

England vs. Ireland British Home Championship game was held there in 1889. The first league game at Anfield was played in September 1888 between Everton FC and Accrington FC, and the home team (Everton FC) went on to win the inaugural league title in the 1890–1891 season.

Note tours are only available for the Centenary Stand while the Main Stand is undergoing redevelopment – they do not include access to the actual locker rooms, players’ tunnel, or dugout.

Online reservations can get made. It’s advisable – to reserve the tour in advance because walk-ups are permitted depending on availability.